This follow-up to the fermented fresno peppers has been a long time coming. A lot has happened since we last checked in:

Let’s get into it!

I then strained the purée through cheesecloth to yield some hot sauce and some much thicker paste. I jarred a little bit of that paste and threw it into the fridge for later, and the rest I spread out in a thin layer on a parchment-lined sheet pan.

That sheet pan spent around 4 hours in a low oven (as low as my oven would allow) until it was fully dried. In the future, I might see if I can track down a friend with a dehydrator, because using the oven was kind of a pain. I placed the dehydrated pepper paste into a mini chopper to reduce it to flakes. The result was … fine I guess. It was cool to have made my own pepper flakes, but I think the paste wound up tasting better and being easier to use.

What a Superb Owl

First off: the form of the wings. I buy whole wings and break them down myself. Not only are the whole wings somewhat cheaper than the party-style wings (even accounting for the wing tips), but they’re not that hard to butcher, and the wing tips are super useful.

All it takes to disassemble a wing is to stretch it out, fit a sharp knife in the middle of the joint between the drum and the flat, then cut. Once that’s done, you can remove the wing tip from the flat in a similar manner. I like taking the tips off because they make amazing stock (and they’re less amazing as mere vehicles for buffalo sauce). 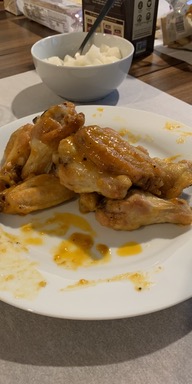 After the wings were butchered, I dusted them in the dry mixture and laid them in a pan in the fridge to dry for a few hours. Once folks started to show up for the game I began roasting them in batches. While the first batch was in the oven, I set to work making the sauce.

The wings roasted and the sauce made, I combined the two and served them to my friends. Between the five of us, we made it through around 9 of the 11lbs of wings, so I’d call that a success.